This is why I love what I do.

When I was about 7 years old, my dad brought home our first computer. This was exciting for me, as I only briefly used computers at my school back then (well, anything can be exciting if you are a child, right?). So I quickly learned to use it. Back then, the dominant OS for computers was Windows XP and I played Pinnball until my hands started to hurt.

With the fith grade I attended the gramar school and we started having computer science lessons. This was a new concept, since other schools didn’t start teaching it until seventh or eigth grade. To my surprise, the computers did not have Windows, just something that looked similar, but worked in a completely different way.

As I later found out, it was Linux (Ubuntu, if I recall corrently). My school used it as a cost saving meassure, and lots of sudents hated it, because they where used to work with Windows.

However, it was different for me. Sure, we all needed time to learn how to use a new system. But our computer science teacher (who also was the system administrator and not a “real” teacher) teached us our first programming language. It was a super easy scripting language called “logo”.

To this point, I mainly saw a computer as something that you can write Word documents, or play games with. Never did I think about how it works. Then it clicked.

After one of these lessons, I asked my teacher how I can program “real” applications. As he was a a computer science mayor and not a teacher, he recommended the programming language “C” and gave me a book to read about it. This resulted in a lot of fun, but also a imense amount of frustration.

So when I got my first own computer in sixth grade, I was already programming my first C programs. They were simple console programs, but this didn’t stop me. So since then, I knew what I wanted to do in my life and it never changed to this day.

Thanks to Mr. Reinhard and my awesome parents. 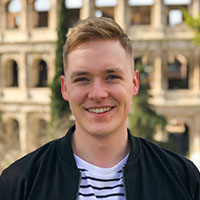 I Design everything from social media posts and logos up to printed banners the size of a building. Read more in my portfolio.

As a full-stack developer I code backends, set up servers as well as design and code frontends. From iOS and Android Apps, Desktop apps, Websites, etc.

Data analysis and data visualisation is my passion. But I also have some side projects involving hardware.